I am pleased to report that in a high quality match, our Year 5 and 6 boys’ football team produced an outstanding performance against Codsall Middle School in the second round of the county cup. Mr Redpath wrote, ‘Codsall Middle School had recently qualified for the regional finals after winning the Level 3 competition at St George’s Park. Totally focused from the start, our team stormed into a 2 – 0 half-time lead after a sharp strike from Callum Hawkings and a wonder goal from Ethan Hodgetts. Codsall Middle School eventually ran out 4 – 2 winners, but at primary level, this was one of the best matches I have witnessed in recent years.’ Well done everyone! The team were as follows: Joel Florey, Ethan Hodgetts, Reece Payne, Caiden Sahota, Zac Taylor, Max Haslam, Austin Morgan, Callum Hawkings, Alfie Van Hagen and Harry Peace.

Considering there are approximately 35 primary schools that make up the Cannock and Rugeley School Sport Partnership, this was another excellent performance to get our sporting calendar well and truly underway. Well done girls!

Our girls suffered a narrow 1 – 0 defeat to Jerome Primary School, but consolidated 3rd position with a 0 – 0 draw against Pye Green Primary School. 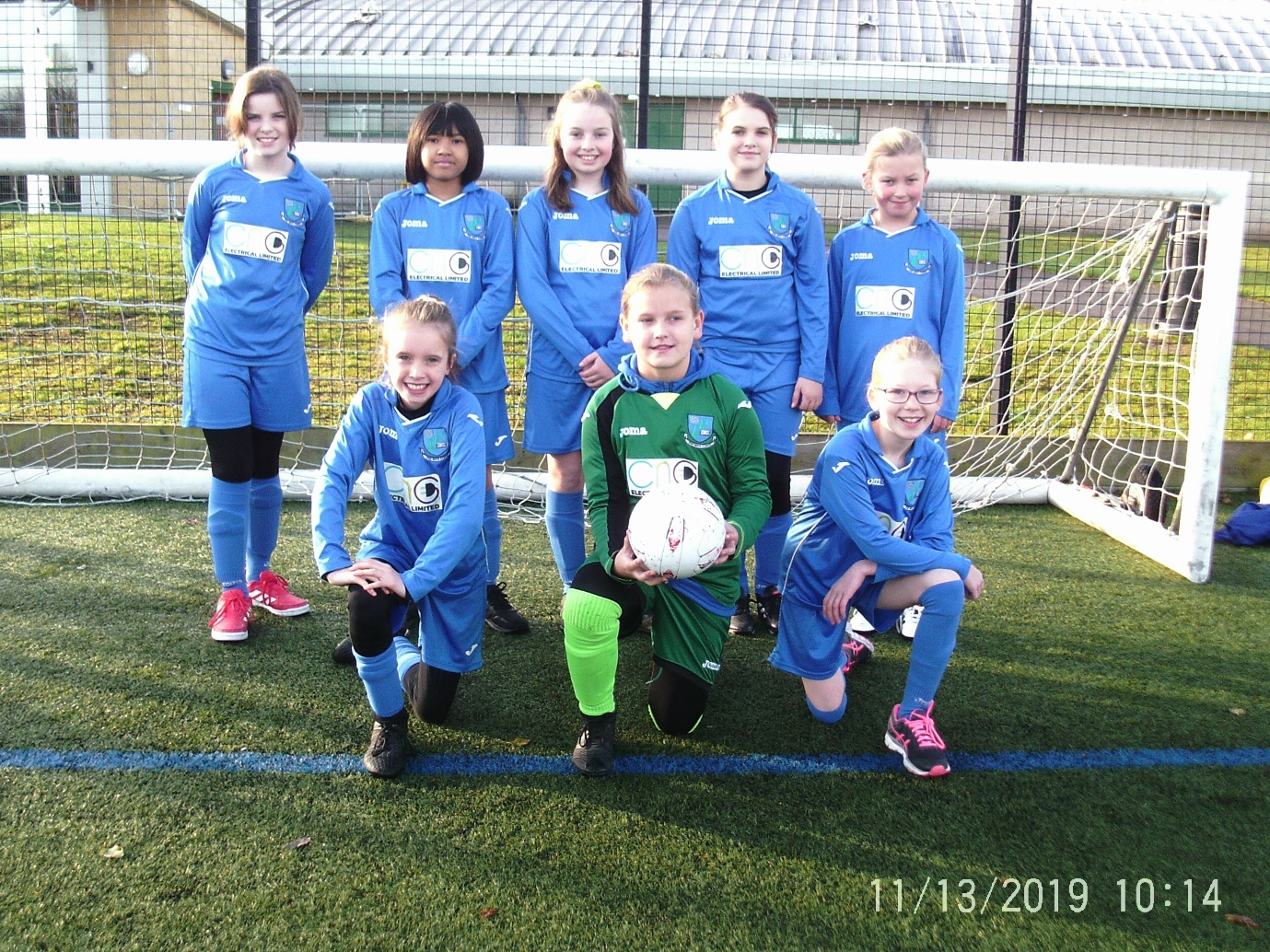 After the disappointment of their first round county cup loss to St. Peter’s PS, our Year 5 and 6 girls football team roared back on Thursday 7th November 2019 in emphatic style at the district qualifying competition at Rugeley Leisure Centre.

Vengeance was sweet as we swept aside St. Peter’s PS 4 – 0, and drew 0 – 0 with perennial rivals St. Luke’s PS. Special mention to team captain Indi Maguire who scored a hat-trick.

The district finals await on Wednesday 13th November 2019.. A chance to emulate previous girls’ football teams at Five Ways, and qualify for the county competition at St. George’s Park at the end of the month. 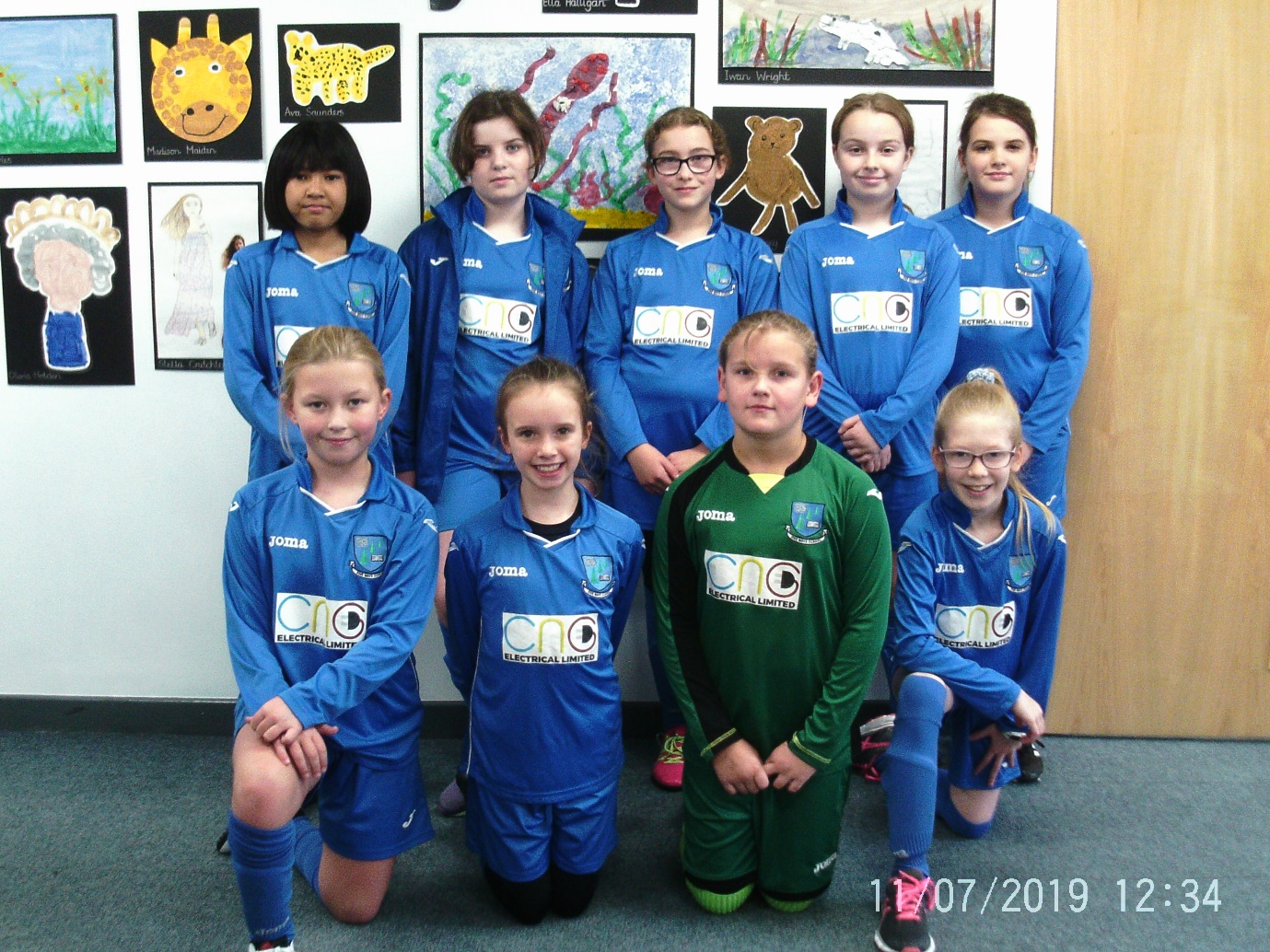 On Thursday 24th October 2019, the Year 5 and 6 Boys Football Team kicked off their season in a very difficult qualifying group at the Cannock and Rugeley School Sport Partnership Competition at Rugeley Leisure Centre.

Well done to Harry P who top scored with 3 goals. The team can now look forward to a second round county cup match against Codsall Middle School. 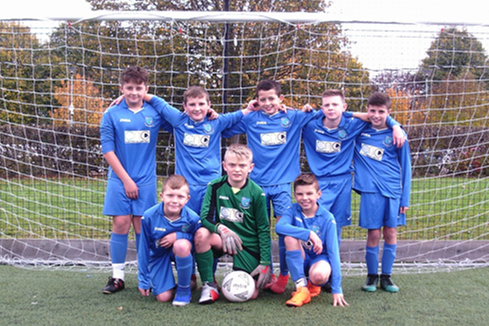 On Friday 18th October 2019, a number of players made their sporting debuts for Five Ways, this proved to be a challenging match against another of our local primary schools, St Peter's Primary.

We lost the match 0 – 2, but there has been excellent attendance at the lunchtime practices. This has resulted in a large squad to choose from, and strength in depth when it comes to selecting players for the matches that lie ahead in the season. 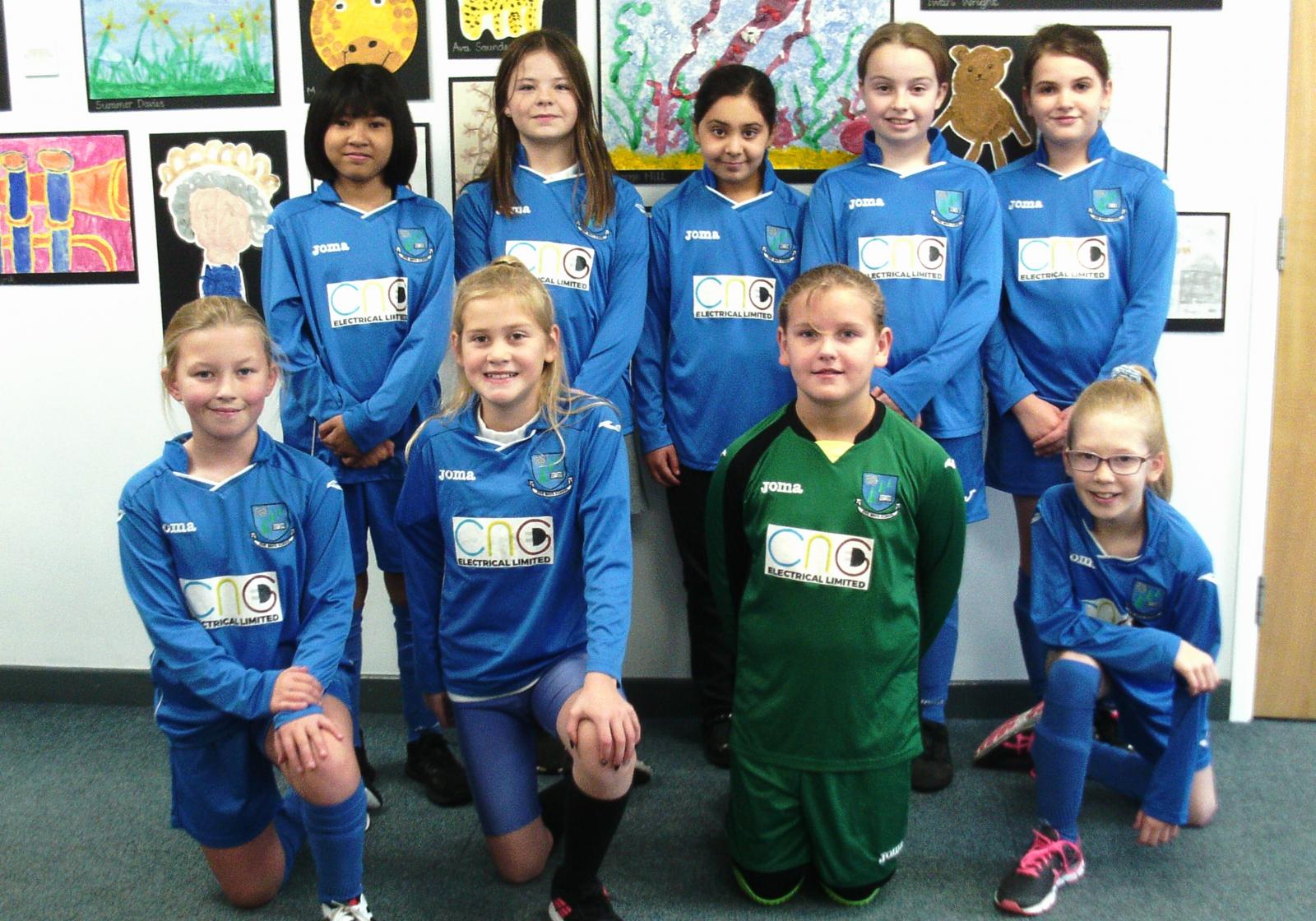 The Year 5 and 6 boys football match against local rivals Gorsemoor Primary School  on Thursday 17th October 2019 heralded another highly anticipated match at Five Ways. With the 12 player squad split into 2 teams of 6, a difficult playing surface witnessed excellent passing and goal-scoring opportunities. Culminating in a 9 a-side match, the overall fixture saw goals from Charlie A, Kian L and Sonny L.

Special mention to the Mum’s of all players. 12 washed kits were returned first thing on Friday morning!! Well done Mums!! 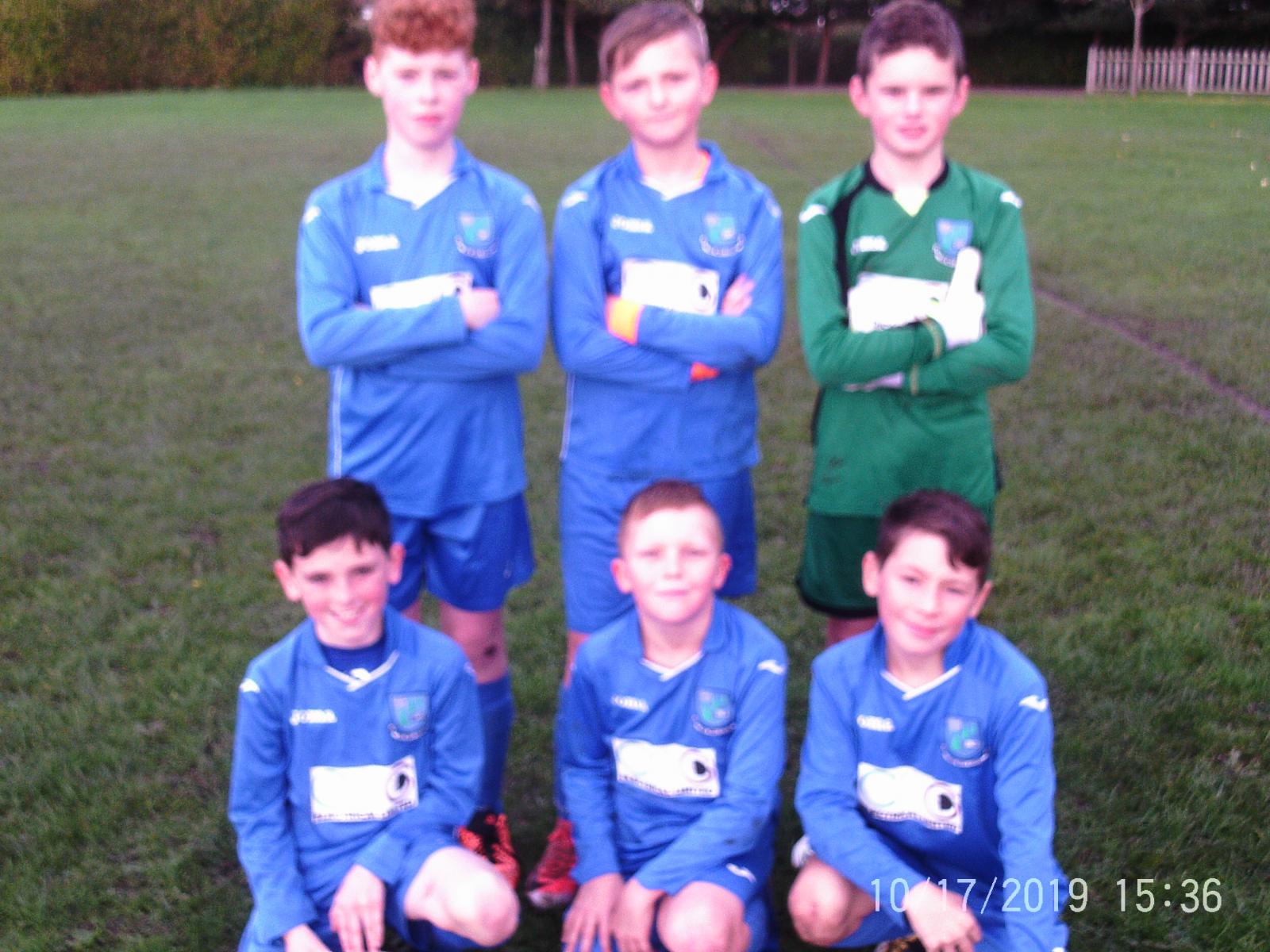 We are delighted to announce that Five Ways has achieved the School Games GOLD Mark Award for the 2018 - 2019 academic year. The School Games Mark is a Gove 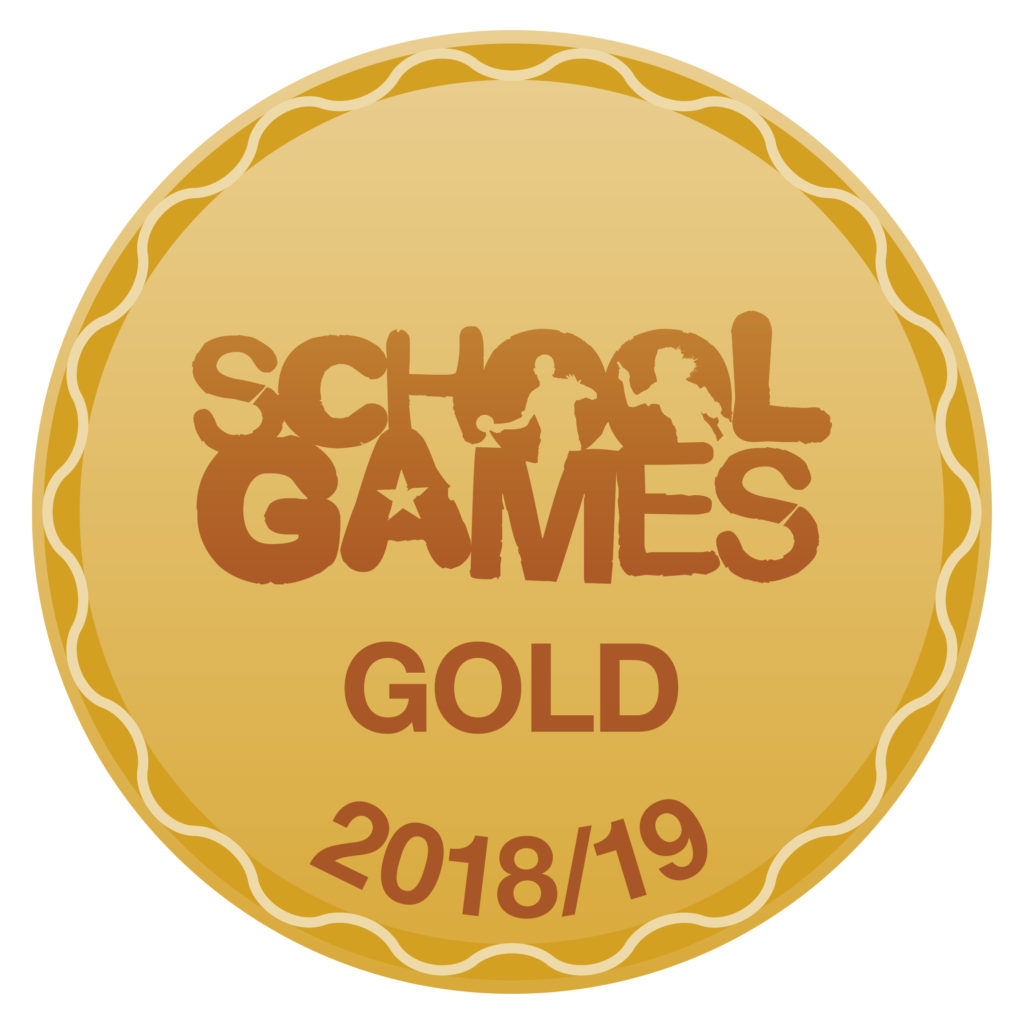 rnment led award scheme launched in 2012, facilitated by the Youth Sport Trust to reward schools for their commitment to the development of competition across their school and into the community, and we are delighted to have been recognised for our success. With many of our pupils competing in local inter-school competitions this year, we are extremely proud of our pupils for their dedication to all aspects of school sport, including those young volunteers, leaders and officials who made our competitions possible. As part of our application, we were asked to fulfil criteria in the areas of participation, competition, workforce and clubs, and we are pleased that the hard work of everyone at our school has been rewarded this year. On behalf of the school community I would like to give special thanks to Miss Myatt, Mrs Marsh and Mr Redpath for their commitment to sport at Five Ways. We look forward to applying once again in 2020!

I am proud to report that our Year 5/6 tri-golf team participated in the Cannock and Rugeley School Sport Partnership competition at Rugeley Leisure Centre on Thursday 11th April. Mr Redpath wrote: ‘The very experienced team comprised of members from Beaudesert Golf Club, regular driving range aficianados and golf development programme participants. This was reflected in the high quality putting and chipping skills on show throughout the various competition challenges. With a strength-in-depth tri-golf squad, our players will definitely improve on their 6th place finish in 2020.’ Well done everyone who took part and represented Five Ways so well! Photographed as follows: Back row, left to right – Sophie Collins, Olivia Mynett, Maisy Aldred-Rogers, and Olivia Osborne. Front row, left to right – Ethan Hodgetts, Sam Rudd, Charlie Asling and Archie Osborne. 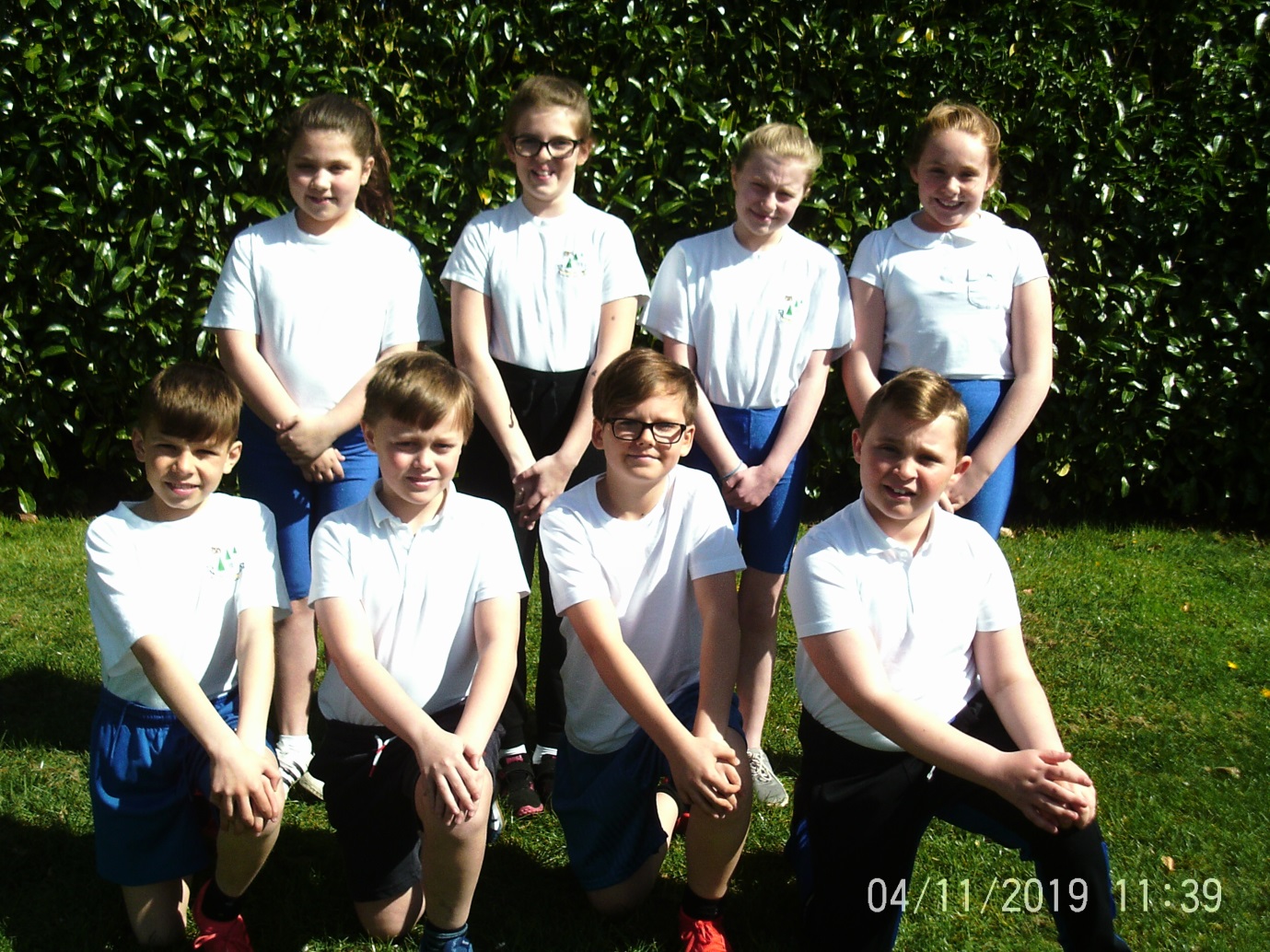 I am pleased to report that our Year 5/6 girls’ football squad took part in a round-robin competition at Rugeley Leisure Centre on 21st March 2019. Mr Redpath wrote, ‘The squad was split into two teams, and they were joined by St Peter’s and John Bamford Primary School from Rugeley. An excellent all-round performance from the squad.’ The team were as follows from left to right: Sophie Hassell, Phoebe Applegarth, Olivia Mynett, Amy Roberts, Danielle Owen, Charlotte Mynett, Millie-Mae Buttrick, Indi Maguire, Evie Tranter, Caitlin Green and Ariana Sandhu-Witton. 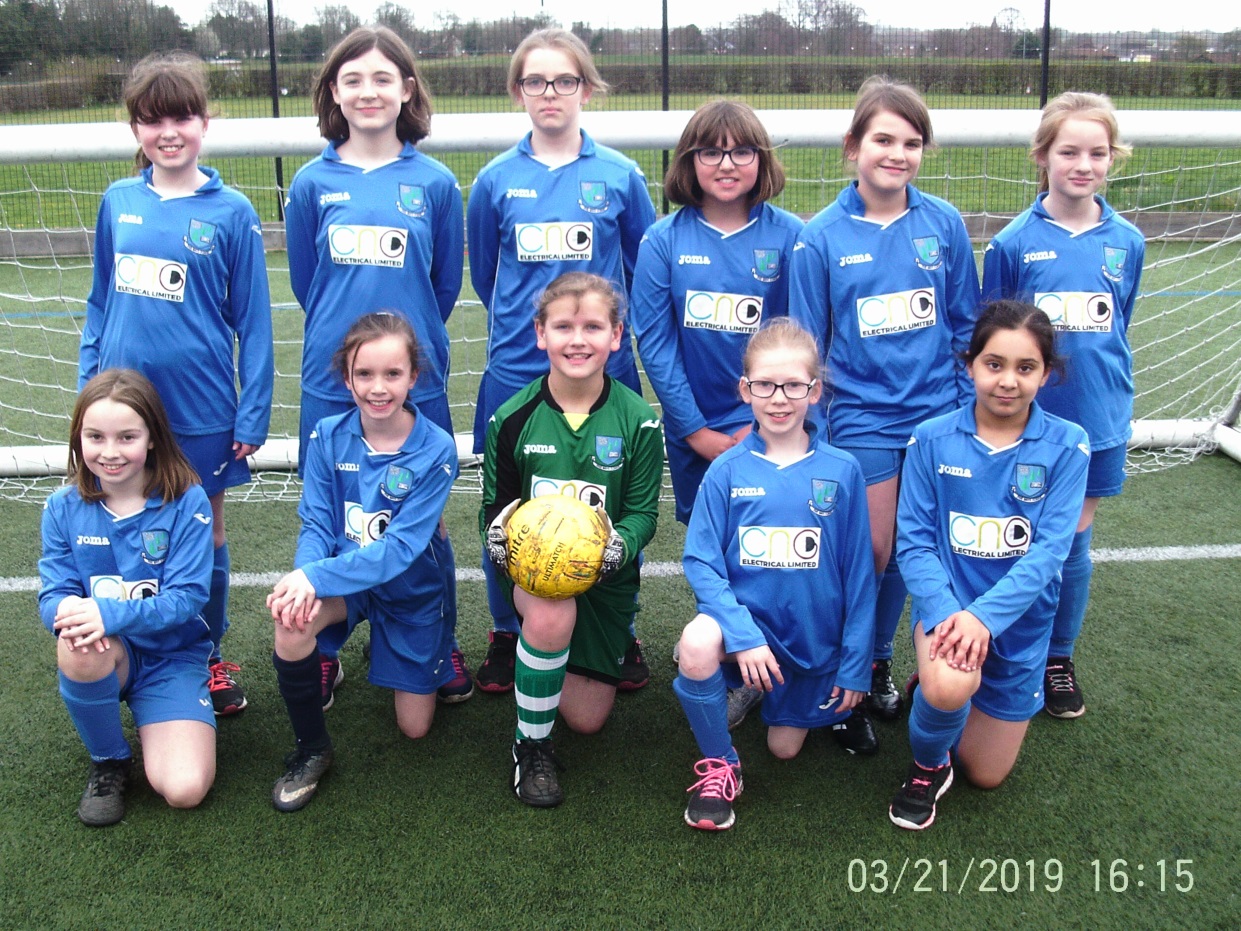 Five Ways in the News! 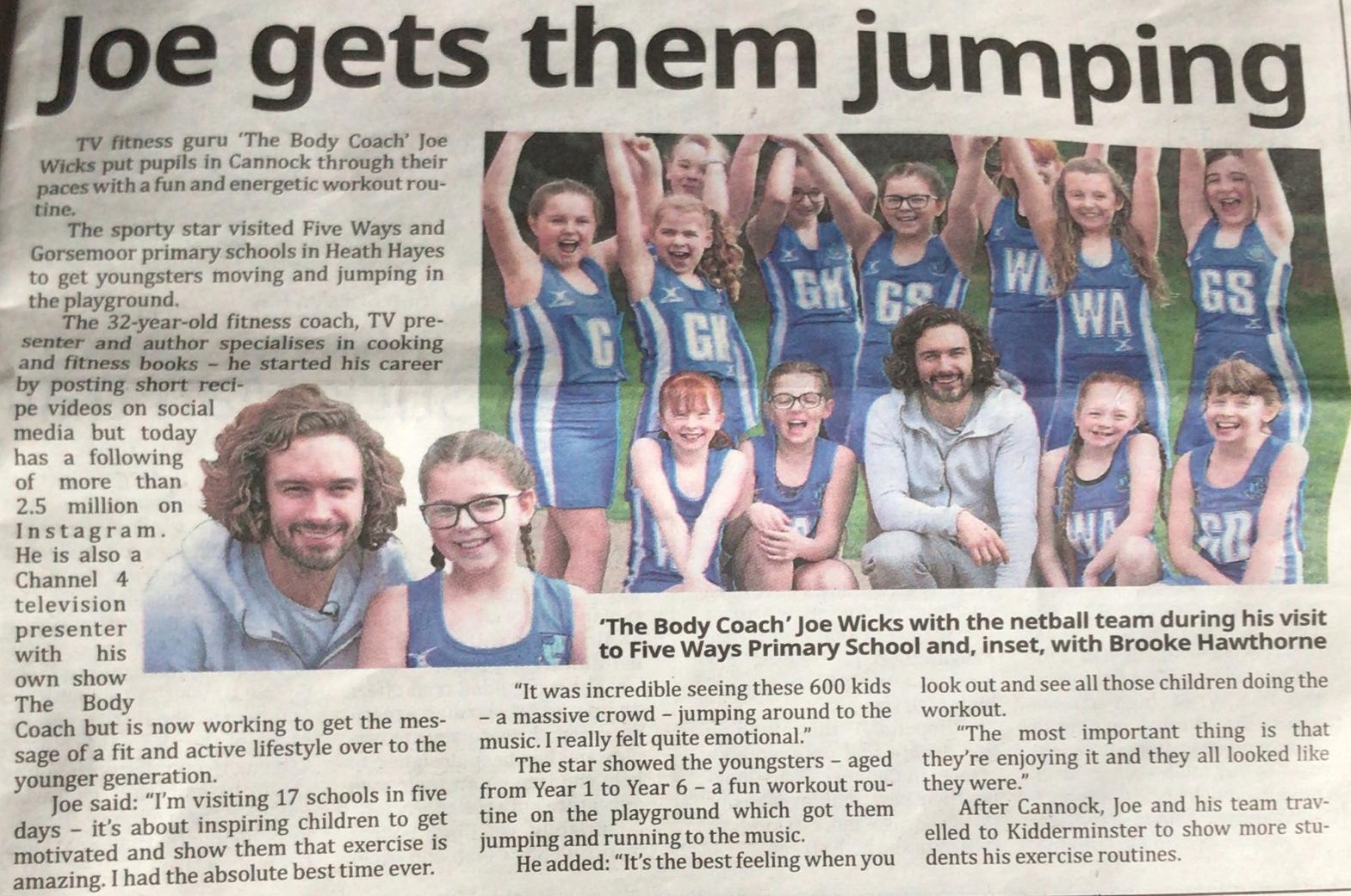 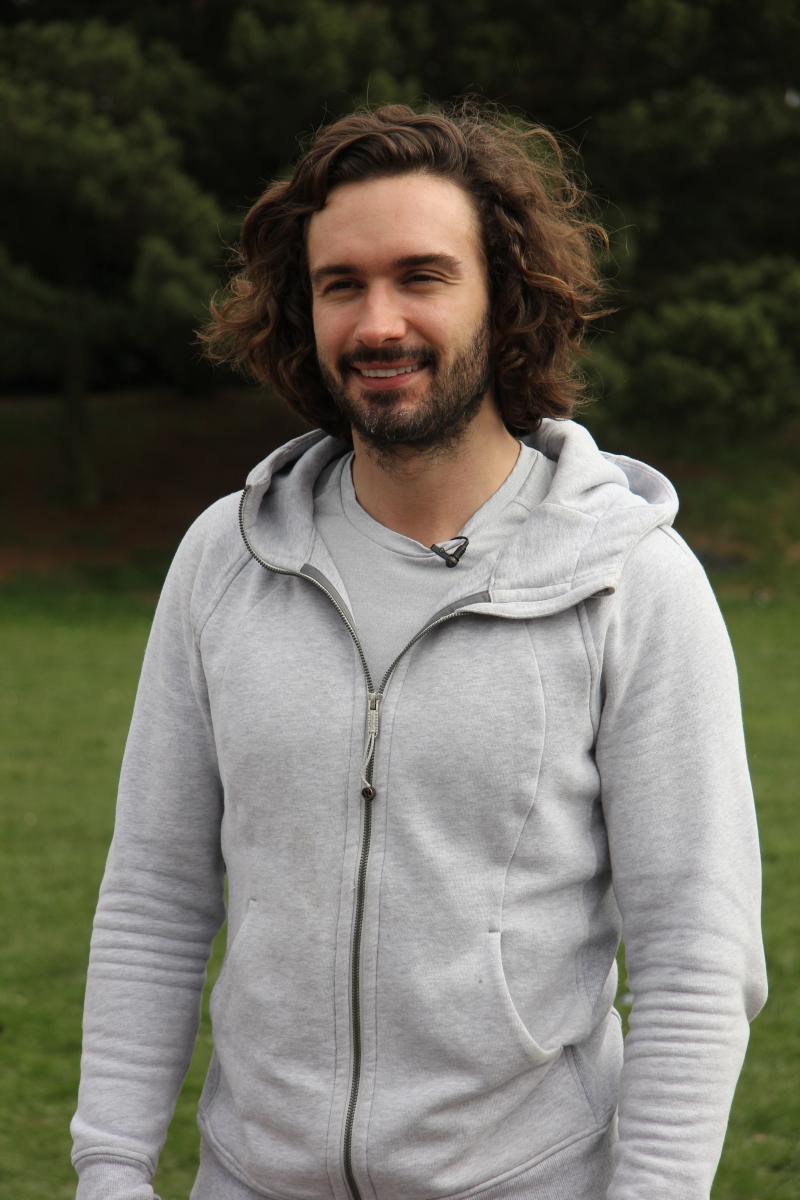 There was an amazing atmosphere at Five Ways on Wednesday 27th March 2019 when Joe Wicks, a British fitness coach and publisher of the Lean in 15 cook books, visited us as part of his UK School HIIT Tour! Joe delivered a HIIT (High-intensity interval training) workout to pupils and staff from Year 1 to Year 6 and interviewed some Sports Ambassadors. Joe also observed Nursery and Reception pupils taking part in their ‘Daily Mile’ and was very impressed with their performance. Joe commented on the outstanding attitudes that pupils at Five Ways have regarding leading a healthy lifestyle, and was extremely impressed with their engagement in his HIIT workout. Well done to Miss Myatt, who teaches PE at Five Ways and is the member of staff who secured Joe’s visit for us, and well done to everyone for taking part so enthusiastically 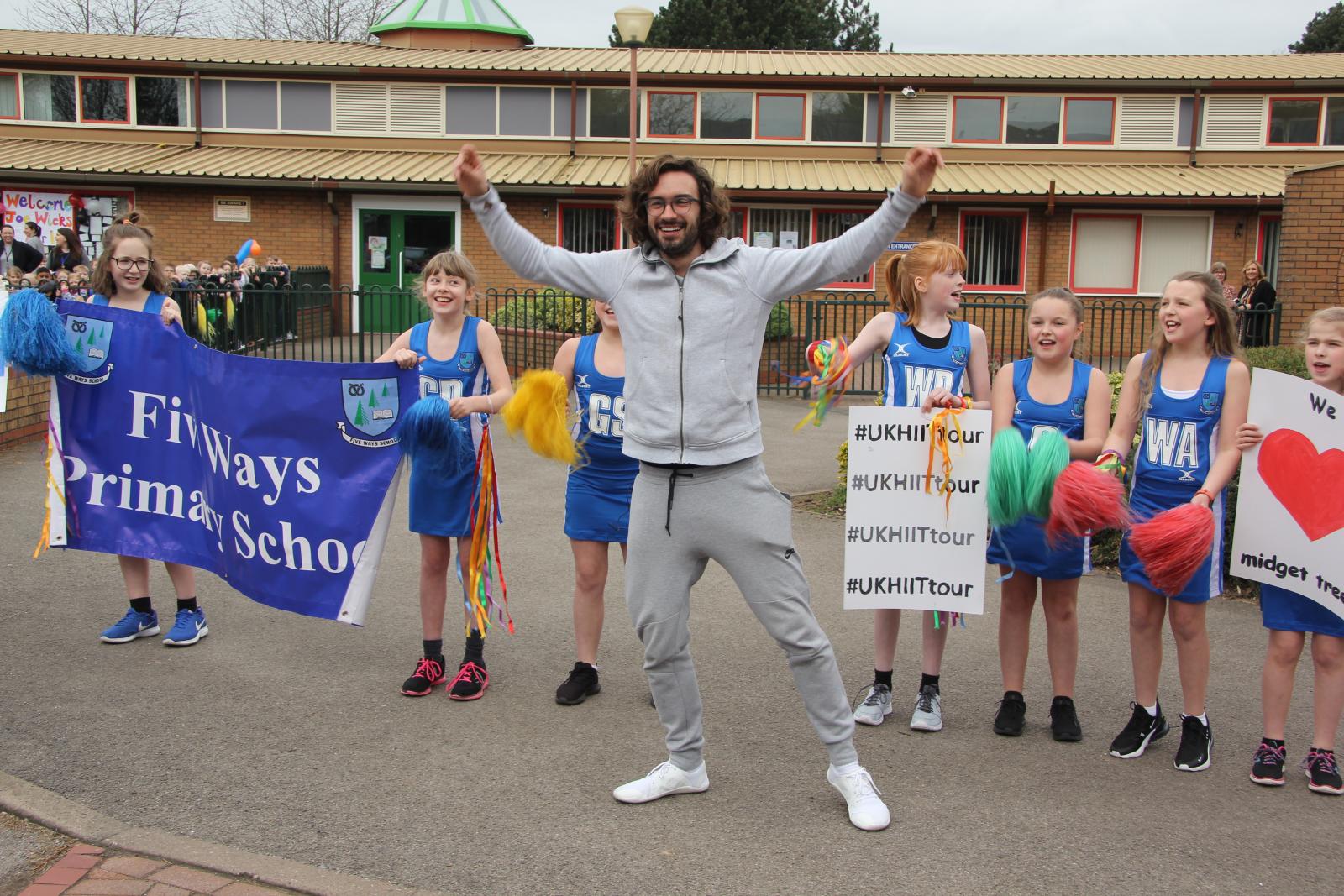 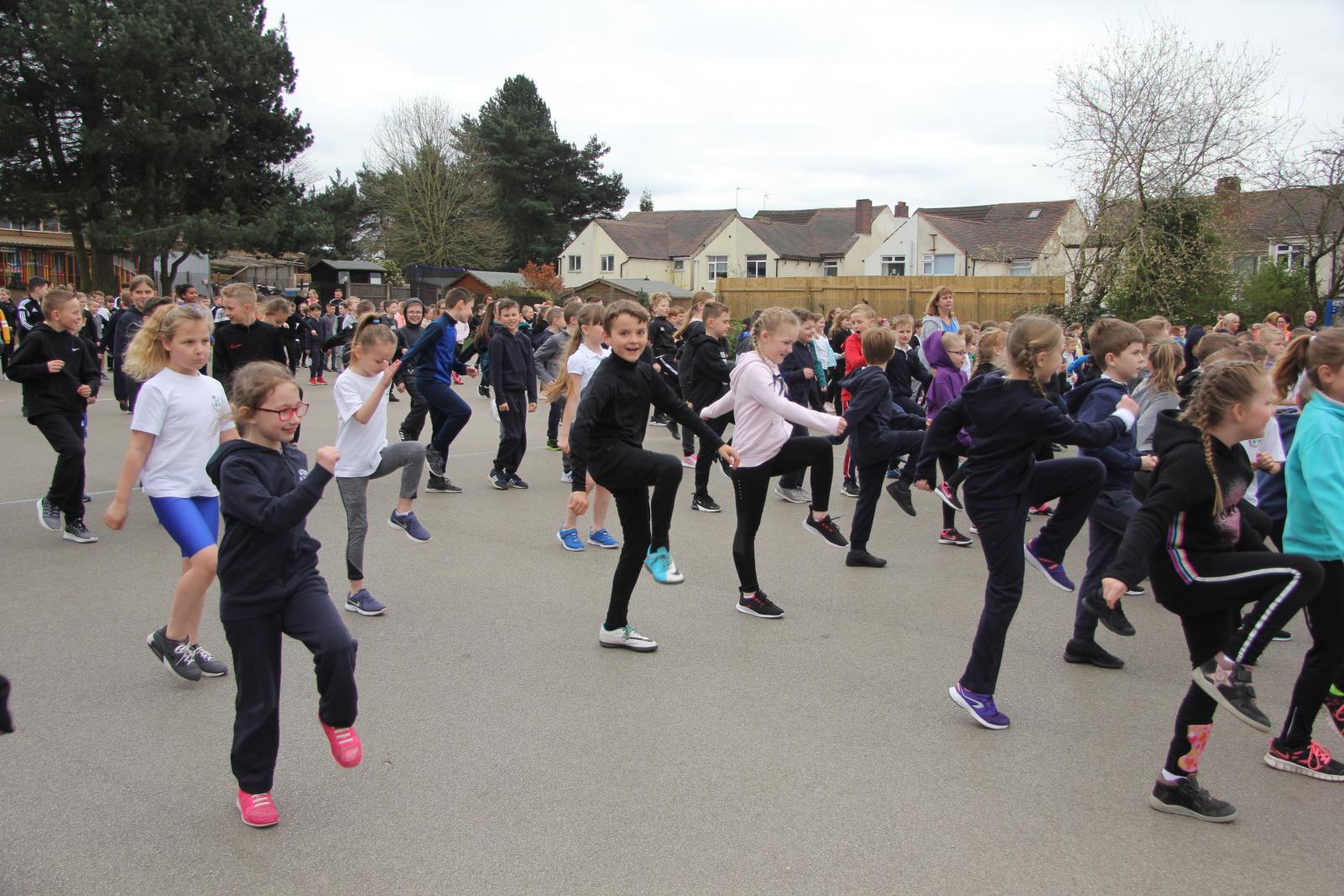 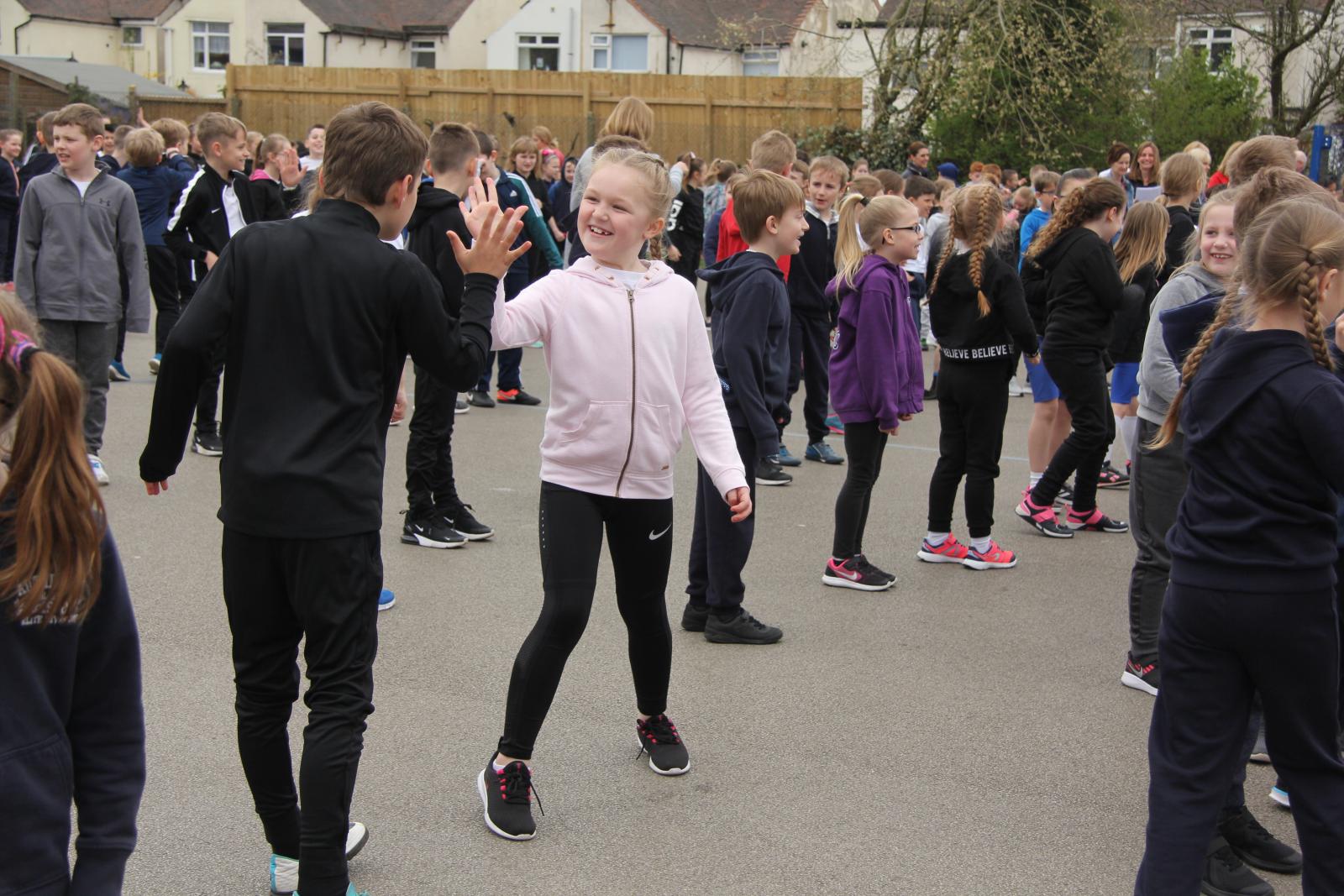 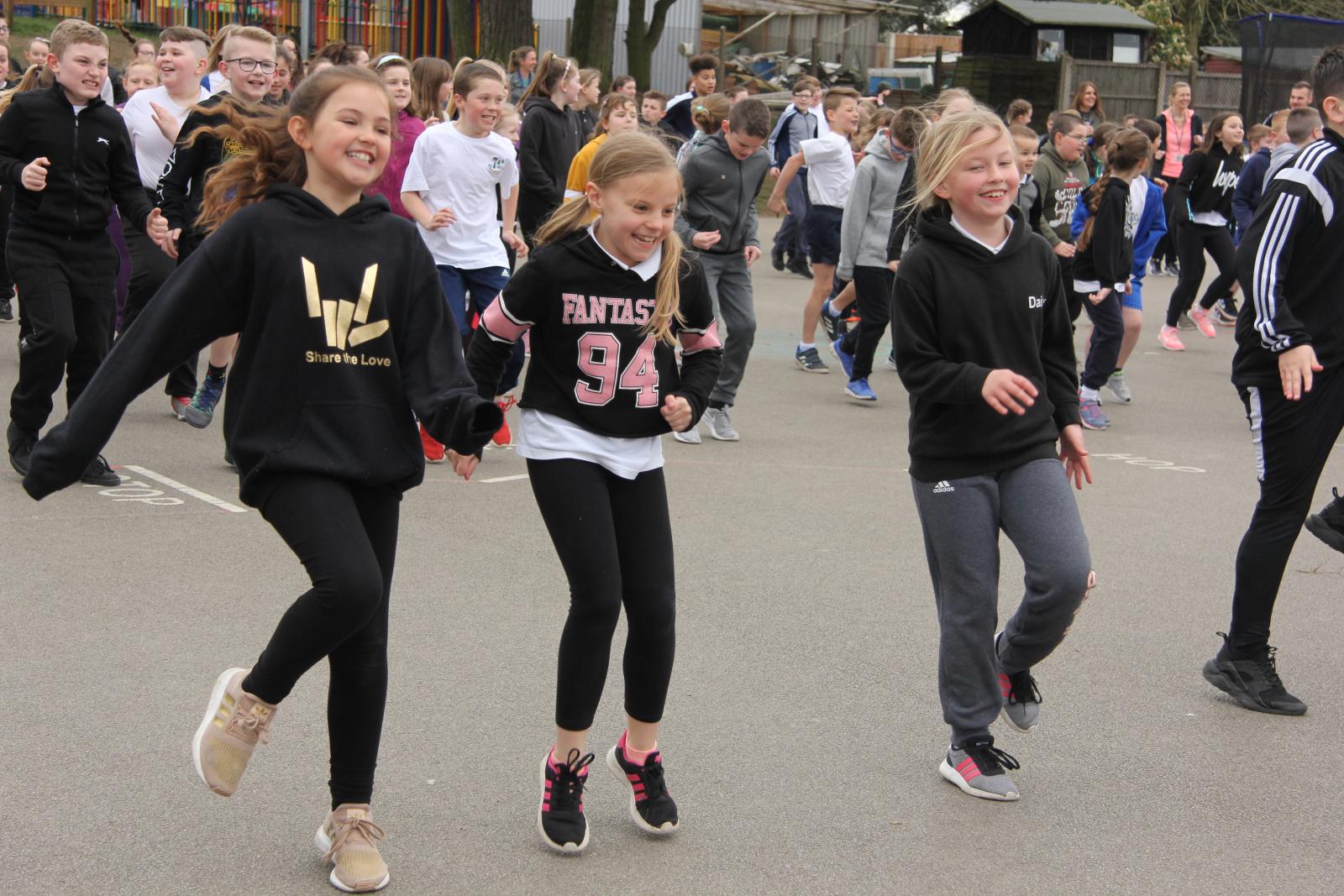 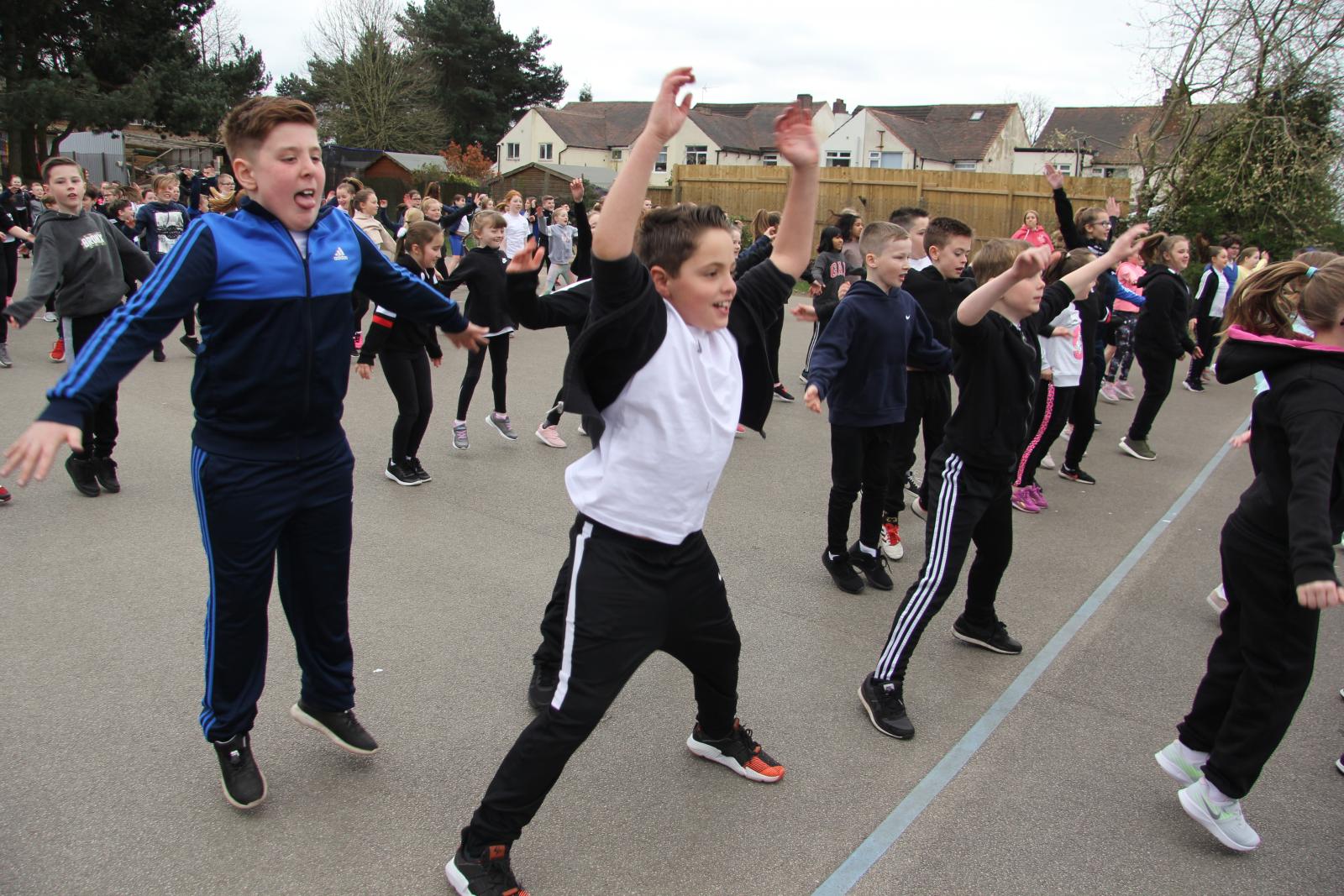 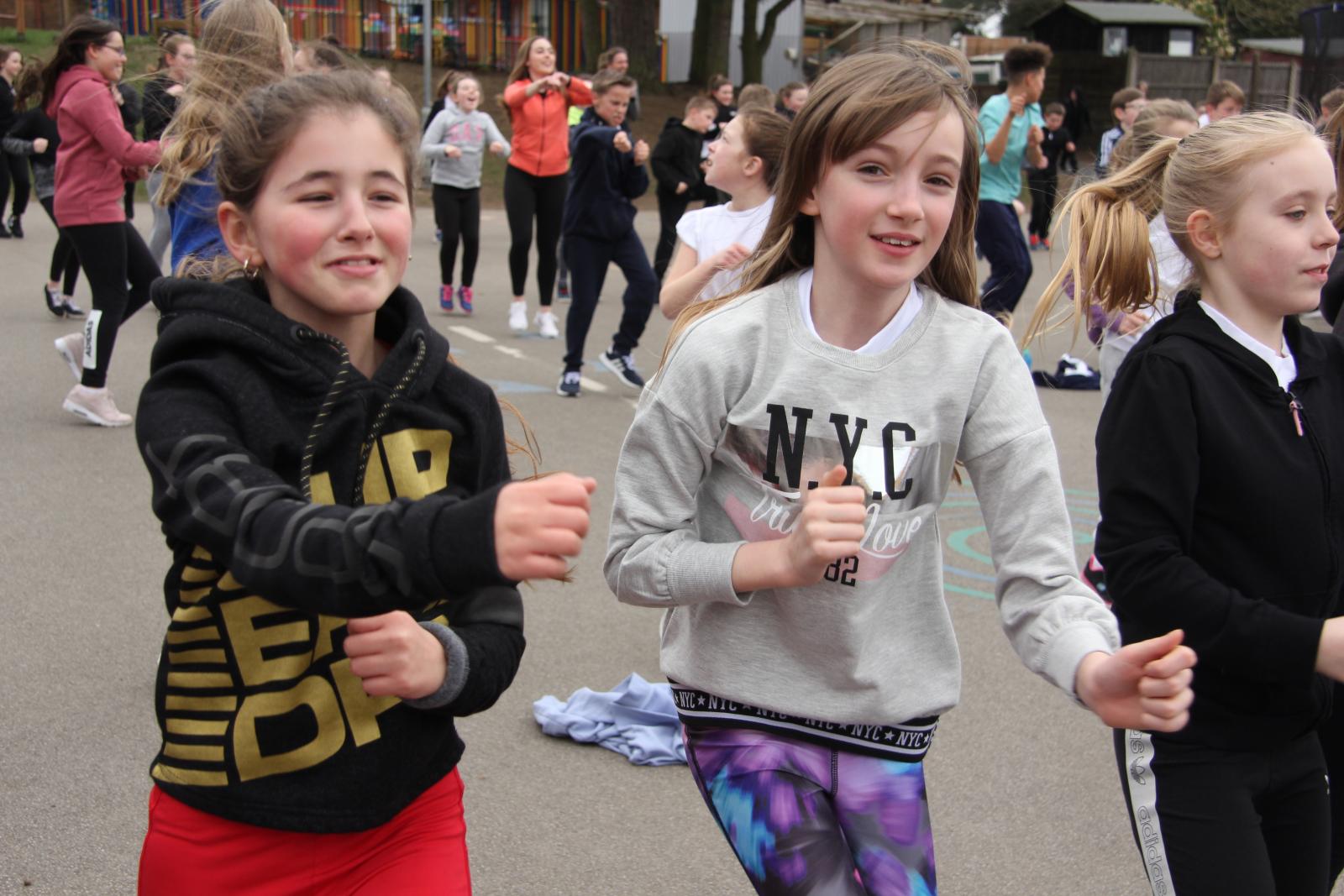 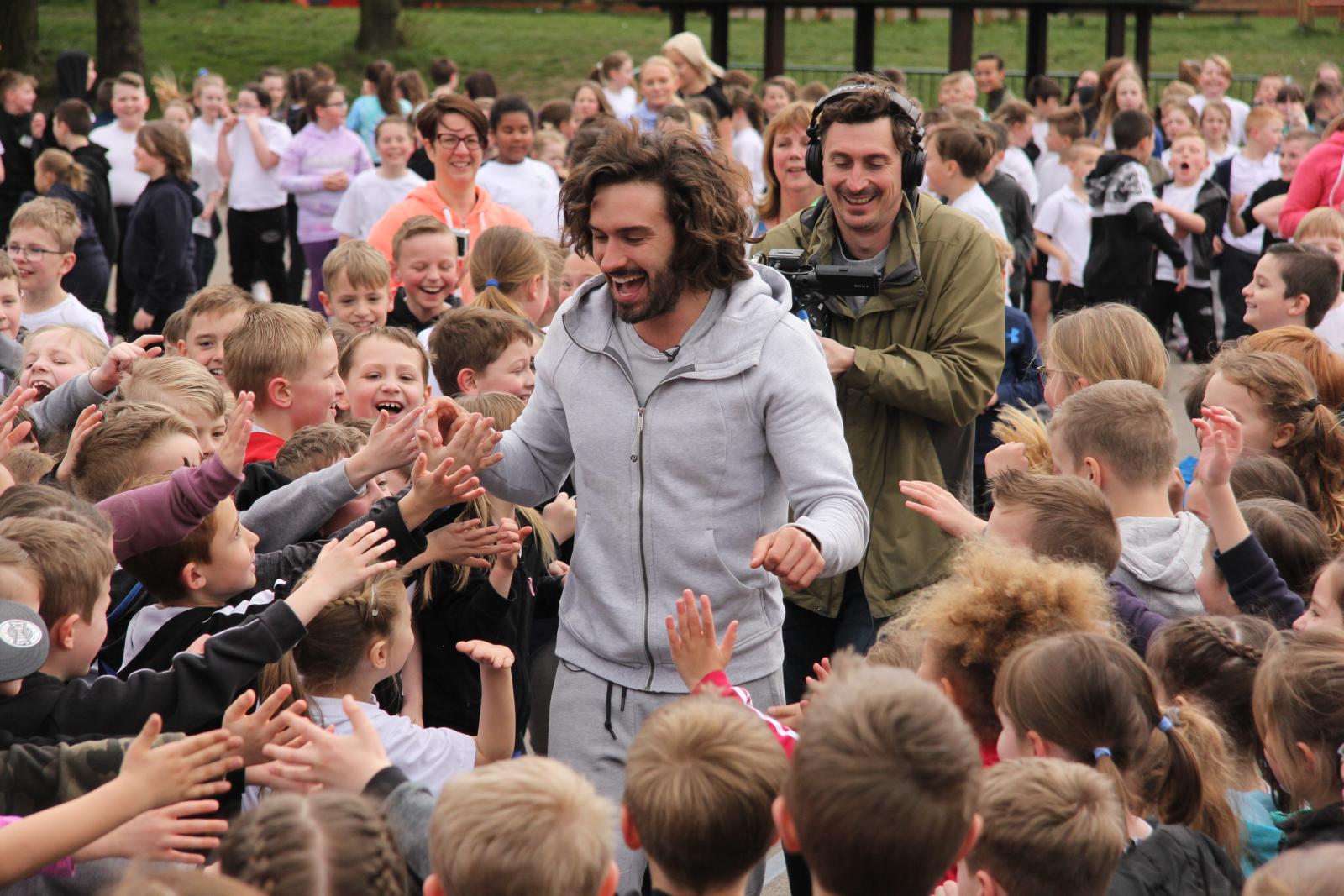 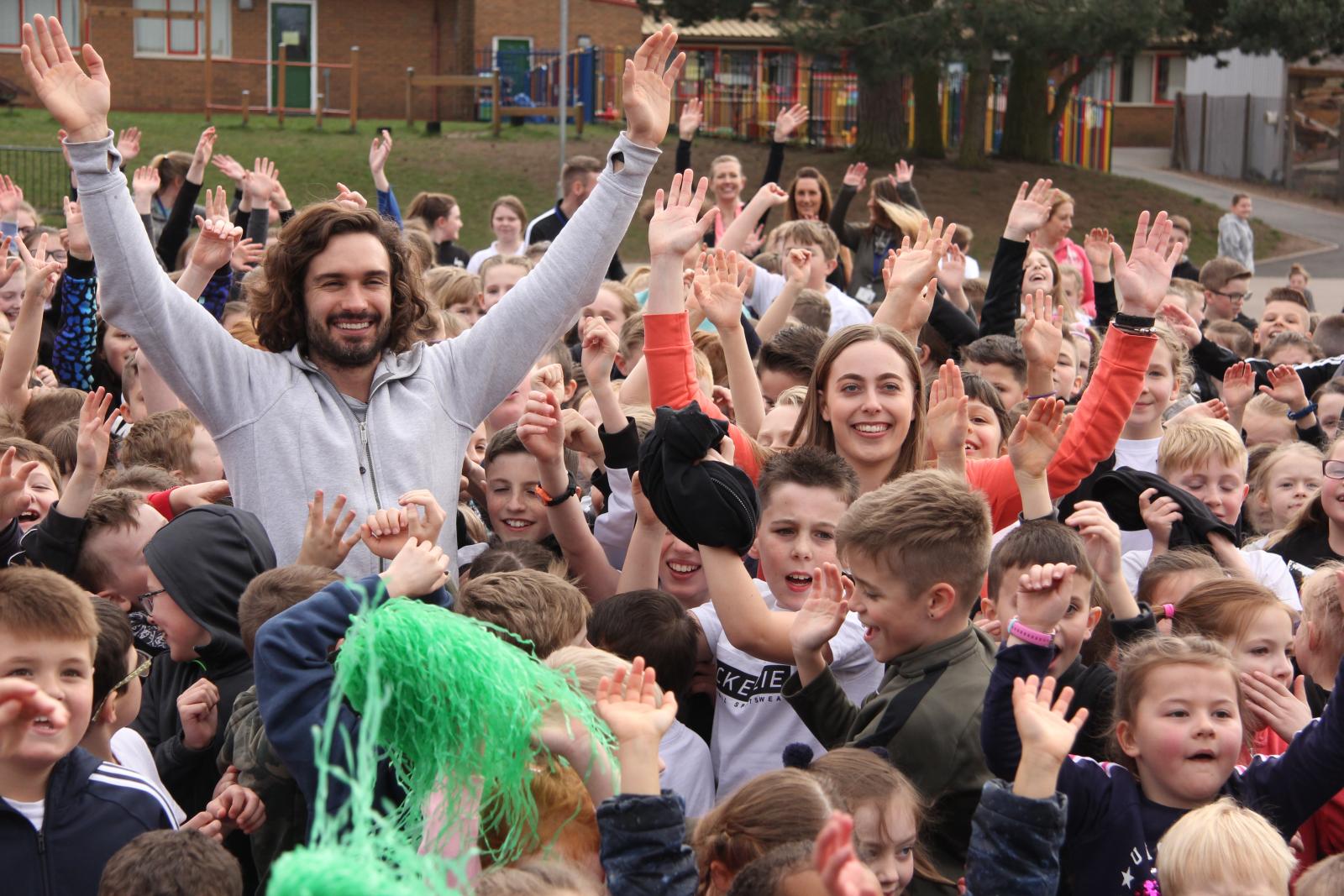 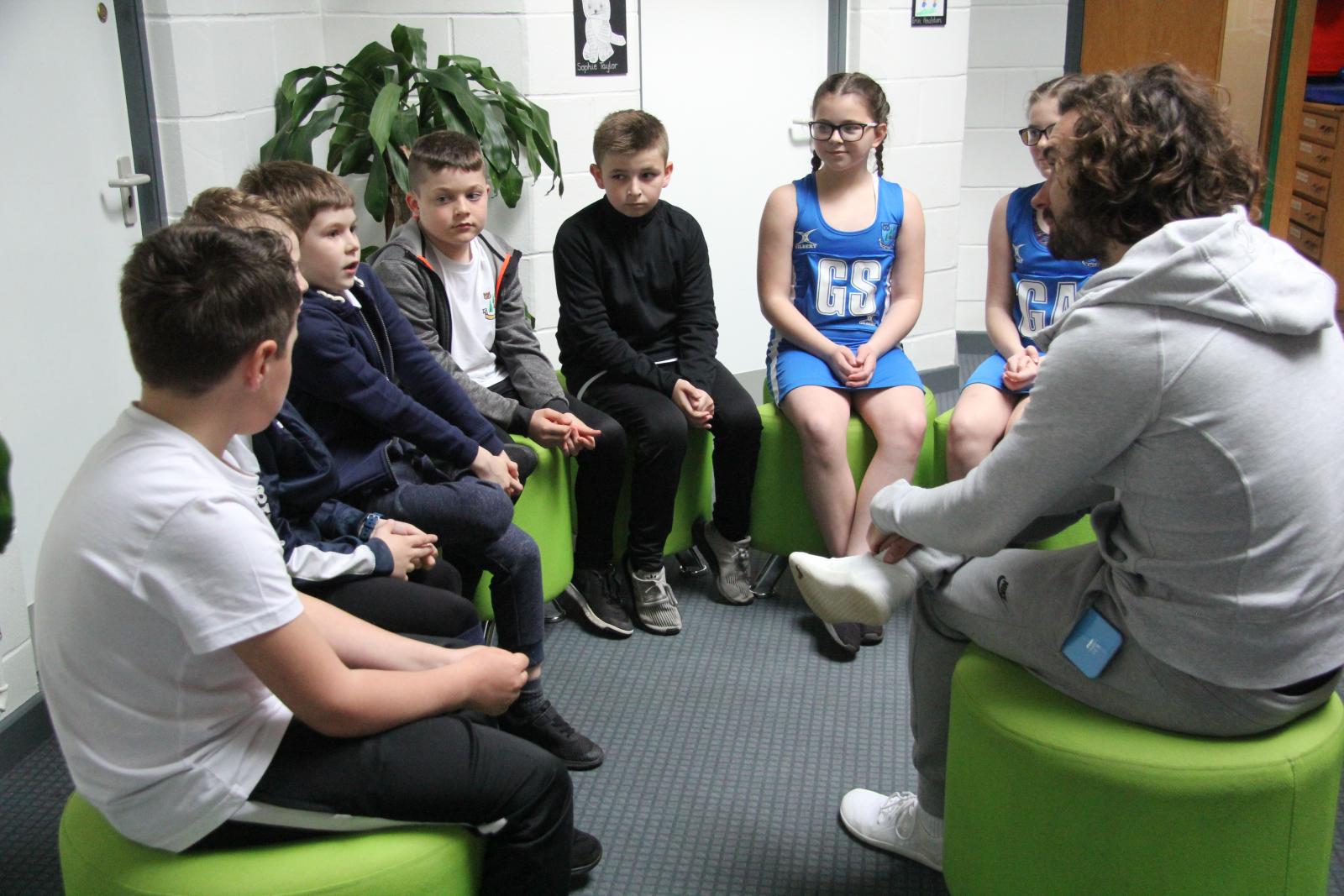 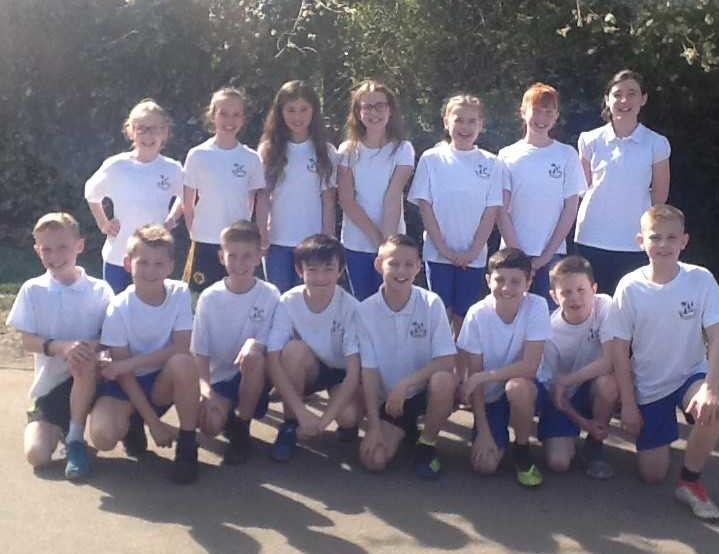 Our Year 5 and 6 boys football team finished runners-up in the level 2 Cannock and Rugeley School Sport Partnership competition at Rugeley Leisure Centre on Thursday 14th March 2019. With 7 teams taking part, our boys won 4 matches and narrowly lost the other 2. Special mention to Archie Saunders and Oliver Rouse who notched 9 goals and 7 goals respectively. 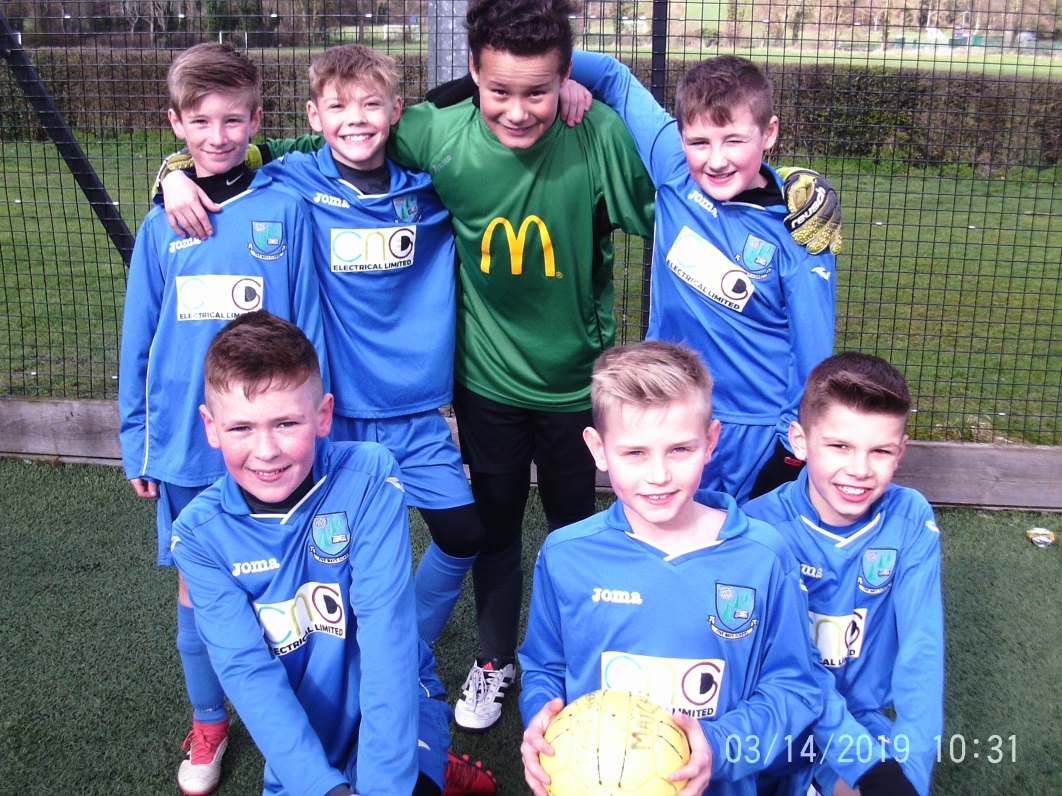 On Thursday 13th February 2019, some of our Year 5 and Year 6 pupils took part in an indoor athletics competition at Rugeley Leisure Centre. Miss Myatt wrote, ‘A phenomenal performance was displayed from all of the children who took part. Everyone tried their very best and enjoyed the fantastic atmosphere. Our team came 4th and I was very proud of their efforts.’ Well done to everyone who took part!

Our Year 6 netball team took part in a friendly match against Chancel Primary School recently. Miss Myatt, who is our netball coach wrote: ‘The girls played well and enjoyed wearing our new netball kit for the first time. I am very proud of the girls and we are looking forward to the upcoming tournaments arranged for this season.’ Well done everyone! You all look splendid and very professional in the new kit! 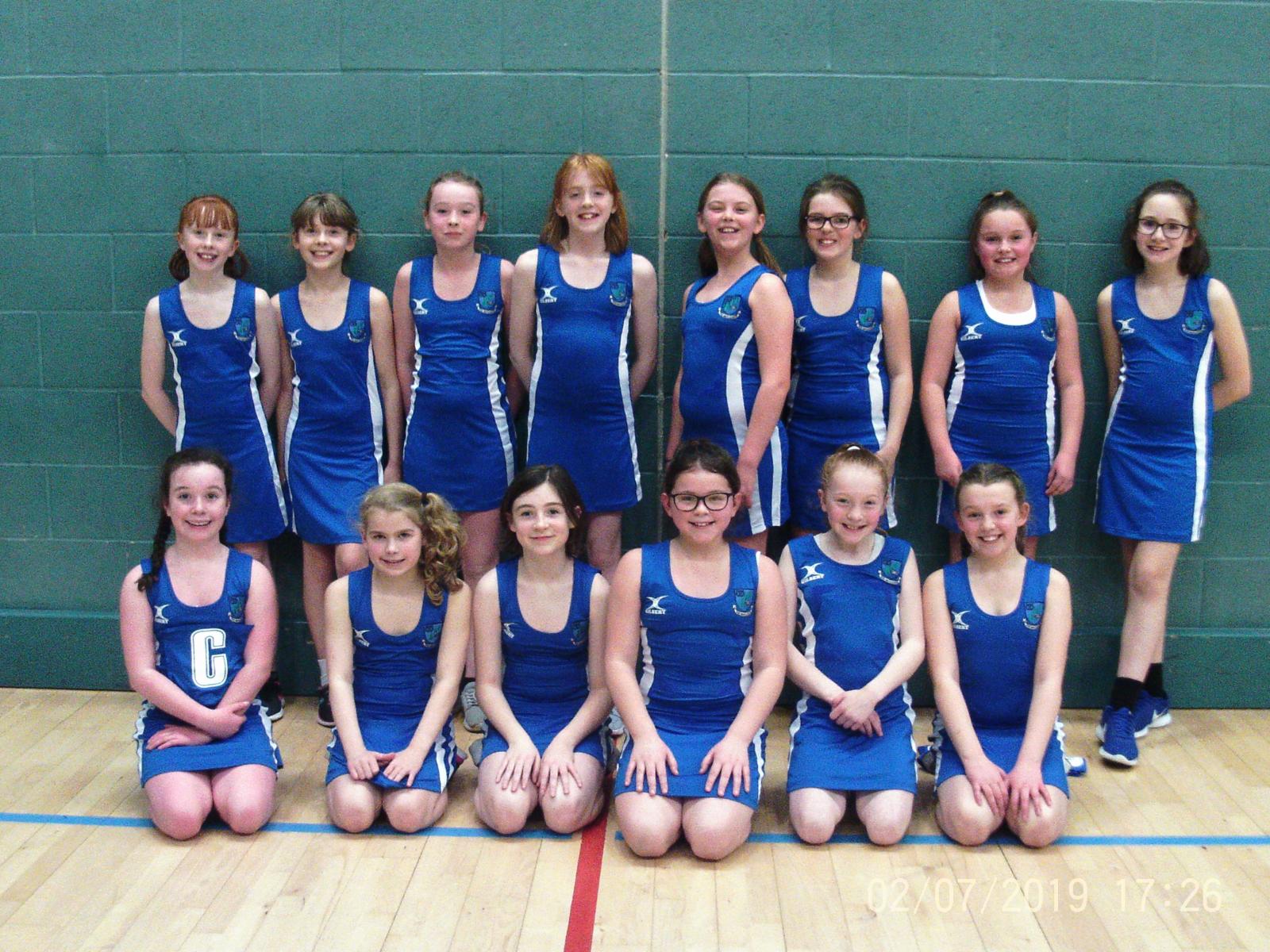 On 12th December 2018, 12 of our Year 5 pupils made their school team debuts for Five Ways, as they travelled to Rugeley Leisure Centre to take part in a multi-games competition. Mr Redpath wrote, ‘The competition was notable for the different types of sport on offer. These included Boccia, Goalball, New Age Curling and Seated Volleyball. Split into 3 teams, our Year 5 boys and girls thoroughly enjoyed their “new games experience”, and demonstrated an excellent all-round attitude when adapting and competing in a new and different sporting environment.’ Well done everyone!  The team were as follows: Oliver Cross, Madison Price, Ryan Hughes, Kaden Campbell, Zac Taylor, Amara AstonWright, Maddison Hall, Hannah Slack, Holly Harper, Kaidan Callear and Callum Stead. 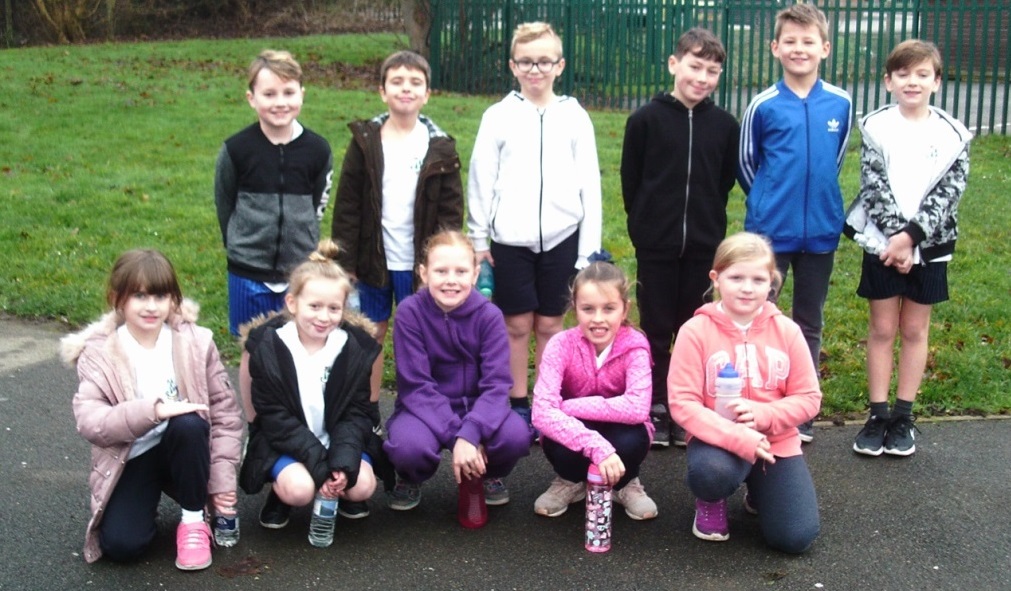 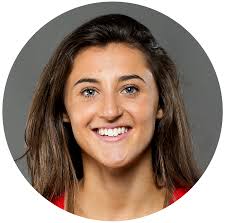 edallist Returns to Five Ways! On 4th July 2018, Beth Cobden, who is a former pupil from Five Ways, spent the day with pupils. Beth shared her Commonwealth Games Netball experience and showed us her gold medal during year group assemblies. 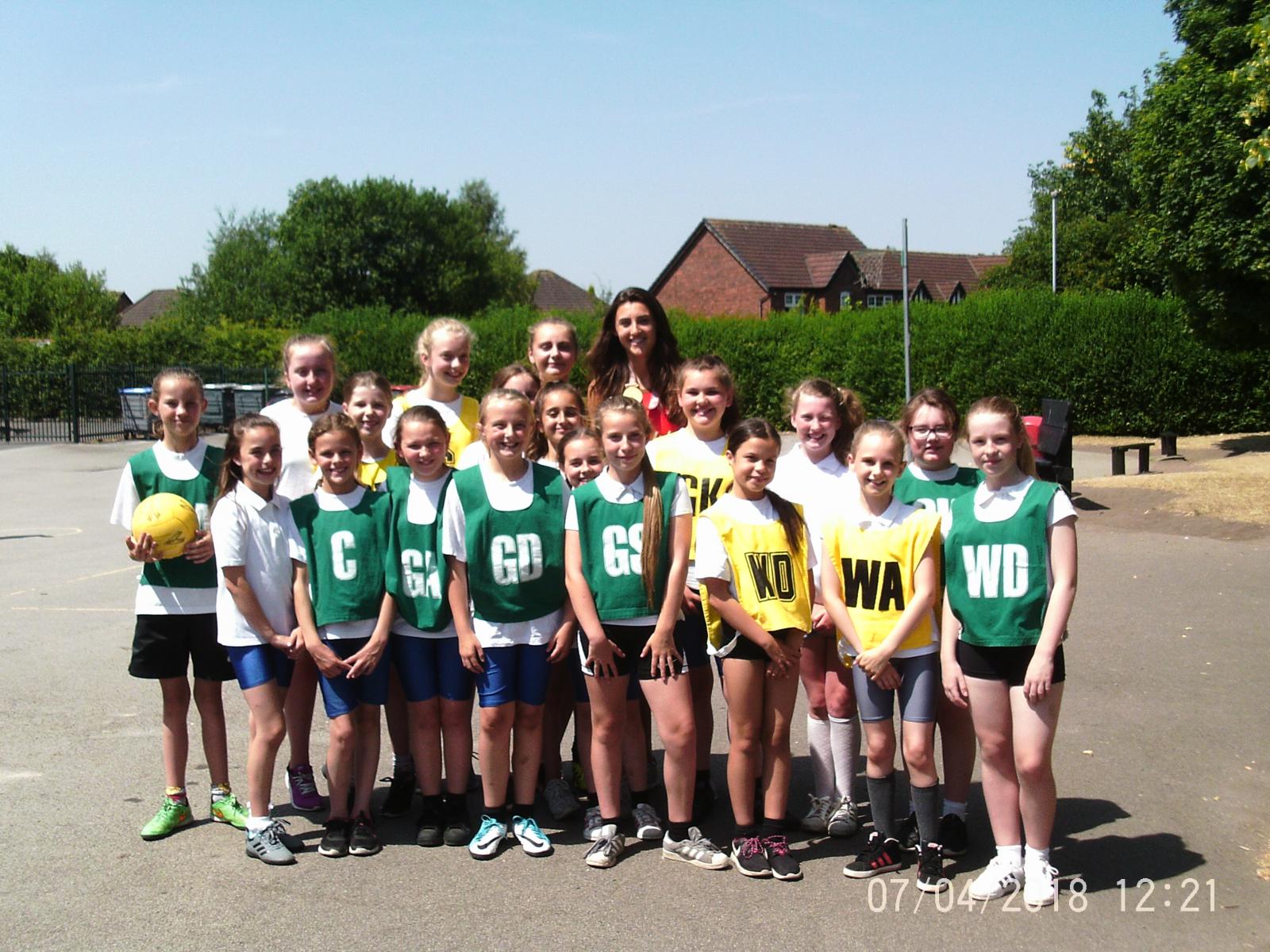 We are delighted to announce that Five Ways, has achieved the School Games GOLD Mark Award for the 2017/18 academic year! The School Games Mark is a Government led award scheme launched in 2012, facilitated by the Youth Sport Trust to reward schools for their commitment to the development of competition across their school and into the community, and we are delighted to have been recognised for our success. We are extremely proud of our pupils for their dedication to all aspects of school sport, including those young volunteers, leaders and officials who made our competitions possible. As part of our application, we wer 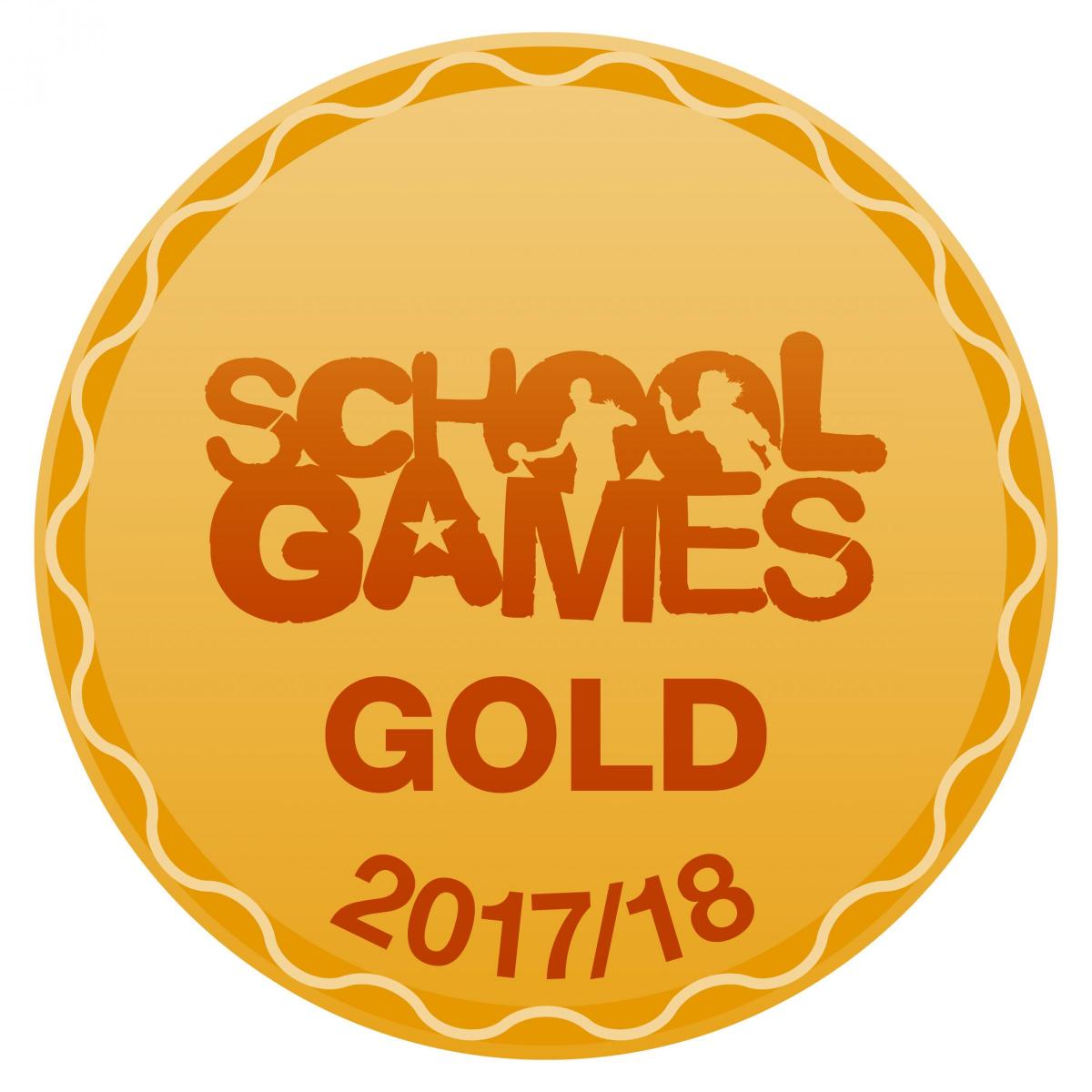 e asked to fulfil criteria in the areas of participation, competition, workforce and clubs, and we are pleased that the hard work of everyone at our school has been rewarded this year. We look forward to applying once again in 2019! On behalf of the governors and staff at Five Ways, I would like to thank Mr Redpath, Mrs Marsh and Miss Myatt for their commitment to sport at Five Ways because without their efforts, this outstanding award would not have been possible.

Four pupils from Year 3 and Year 4 took part in a tennis competition at Rugeley Leisure Centre on Monday 25th June 2018. They competed in an all-day tournament and played some fantastic matches. The pupils won all of their group matches and were group winners! They won their semifinal match against Heath Hayes Academy and after a very close final, lost to St Mary's Primary School in Colwich. A huge well done to the four pupils who took part; coming 2nd place out of 13 schools is a tremendous achievement! The pupils who took part were Jack Hodgkins and Sophie Hassall from Year 4 and Elysia Peters and Ethan Read from Year 3. Well done everyone!